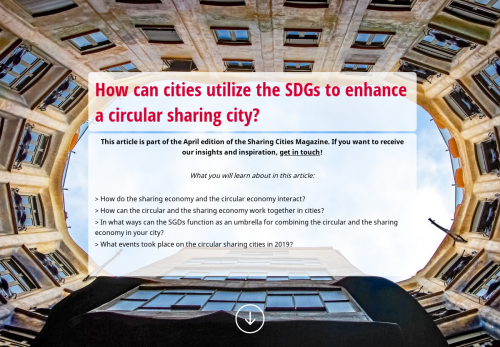 How can cities utilize the SDGs to enhance a circular sharing city?

This article is part of the April edition of the Sharing Cities Magazine. If you want to receive our insights and inspiration, get in touch!

What you will learn about in this article:

> How do the sharing economy and the circular economy interact?

> How can the circular and the sharing economy work together in cities?

> In what ways can the SGDs function as an umbrella for combining the circular and the sharing economy in your city?

> What events took place on the circular sharing cities in 2019?

If we look ahead 50 years from now, in which ways do we live differently? How will we consume and produce? Will we live in a sustainable society? There is a thin line that divides what we perceive as realistic and what we would like to happen. What has been proven so far by the challenges we face in relation to our energy and economic system - vulnerability of our system, climate change side-effects, unsustainability on account of resource depletion -, is that we need to change the way we use our resources. In the face of a rising global population and the associated growing resource consumption and negative environmental impacts, it becomes increasingly apparent that business as usual is not an option for a sustainable future.

In this perspective, during the last decades, two different approaches emerged as a response to different challenges and opportunities. The sharing economy started to emerge and gain consensus after the 2008 crisis, as an alternative to the traditional economic approach. On the other end, the fundamental need for an alternative to the traditional linear model of growth has led to the emerging debate about circular economy (CE), described as an economy with closed material loops. While the concept of a circular economy has been discussed since the 1970s, switching from the current linear model of economy to a circular one has recently attracted increased attention from major global companies and policymakers. Considering both their (potential) positive impacts, how can these two approaches be integrated? Will they contribute to a more sustainable economy and society? And, what can cities do to make the most out of these two trends? In this piece we will briefly explore the possibilities, also by looking how is the Sharing Cities Alliance working in this direction.

The rise of the sharing economy is arguably one of the most significant global socio-economic developments over the past decade. Using online platforms, millions of consumers have started to offer their idle goods for a small fee, or even for free. Although this practice existed before the advent of online platforms, it was then confined to sharing among family and friends. The environmental promise of sharing platforms holds that consumers become much less reliant and dependent on individual, private ownership. Instead, they can have cheap and easy access to goods owned by other consumers that otherwise would stand idle. In doing so, consumers do not only save money but would also contribute to lower material demand and energy use. For example, a research conducted by shareNL showed that positive environmental effects can be realised if these goods are used to meet the consumption needs of others that would otherwise have bought a similar product As such, the sharing economy can be considered, at least potentially, as contributing to a sustainability transition. But there are also different views regarding the sustainability connotation of the sharing economy, which are questioning that the dominant role model sharing economy platforms are not strongly oriented towards sustainability.

On the other hand, the circular economy is an economic system taking a regenerative approach - instead of the linear one -, aiming at minimizing waste while making the most out of resources. In recent years, the circular economy has gained increasing prominence as a tool which presents solutions to some of the world’s most pressing crosscutting sustainable development challenges. By addressing root causes, the concept of a circular economy, an economy in which waste and pollution do not exist by design, products and materials are kept in use, and natural systems are regenerated provides much promise to accelerate implementation of the 2030 Agenda.

Digitally-enabled technology solutions that connect business and consumers through an app by providing affordable and convenient solutions of existing products, have mostly been successful. Start-ups have taken advantage of the potential of digital business opportunities. In this perspective, sharing and collaborative models are part of the circular economy’s bigger picture. They can play a role in extending the amount of time a product is in use, while maximizing utilization. Sharing economy models also exploit the highest value opportunities within circular economy, as the cycles of reuse where the product’s integrity is maintained, and the greatest amount of embedded energy and labor is retained. This evolution has taken place in a context of fast-developing mobile technology and a growing acceptance of a changing relationship between businesses and their customers, a transition to accessing products and services, rather than owning them (when the overall benefits to the customer are greater).

The combination of new app technologies and the rising awareness of idle capacity’s potential has made the sharing and collaborative economy an easy option for the circular models. But why is integrating the two models so important? Let’s take the example of a car. If the car is completely circular, but it rides around with only one person or item, we still overuse space in our cities. If ride sharing is promoted to have less cars on the road, but the cars that are on the road are running on diesel, and are not recycled we still will not get the most out of it. That is why integrating the two fields is a key opportunity for cities. We would have circular assets, running on renewables and used effectively to reduce pressure on urban spaces and lower usage costs for citizens.

The world has changed dramatically in the last two decades, but there are shifts that are particularly serious. Firstly, we are closer than ever to eradicating extreme poverty. Secondly, human societies are causing more damage than ever to the planet and the environment. Thirdly, inequality among and between countries is increasing.

Since their implementation of back in 2012, the SDGs were utilised in the political agenda of several countries and local governments worldwide, to meet the urgent environmental, political and economic above-mentioned challenges facing our world. According to a report from the Business Commission, achieving the SDGs could create 380 million jobs and help unlock at least $12 trillion in opportunities for business by 2030 alone. According to the report, cities play a key role in achieving this. But how do sharing & circular approaches fit in this scenario? Sharing for global sustainable development offers cities an alternative route to catch up while giving solutions to developing countries for optimized resources allocation. It can be considered as a way to sustainable development and a world of shared future. On the other hand, the circular economy (CE) has been gaining traction as an approach for achieving local, national, and global sustainability. The relationship between Sharing Circular Economy practices and SDGs targets show that these practices can, potentially, contribute directly to achieving a significant number of SDG targets. But how can cities utilise the SDGs to enhance a circular sharing city?

Our work at the Sharing Cities Alliance has always been characterized and distinguished by our approach to challenges and opportunities of sharing and platform economy. Lastly, we have been asking ourselves how we can aim further, and understand our long-term impact, and at a broader scale. As an independent foundation with long-term experience on the topics:

Which of the SDGs does the SCA contribute to with its activities?

The strongest relationships exist between circular economy and sharing economy practices and the targets SDG 8 (Decent Work and Economic Growth), SDG 12 (Responsible Consumption and Production), with synergies that can be created through Sharing Circular Economy (SCE) practices among several of the SDG targets. Overall, we aim to address with our activity and services the following SDGs:

“By supporting our member cities to maximize the benefits of the shared knowledge between and among the cities of the SCA, we’re helping to meet the United Nations Sustainable Development Goals (SDGs). Economic, environmental and societal dimensions are all directly addressed by the Alliance activities. Being the SCA a network with 16 cities for a total of more than 100,000,000 citizens, we firmly believe that our services are not meant just to have an impact in city governments, but on each of the above-mentioned citizens.”

You can look back at our work in this field, specifically:

April 2019: Online Seminar I Sharing & Circular Economy I The Hague I Jay Navarro

October 10-11 2019: Sharing Cities Summit I "The role of sharing cities in advancing SDGs" I Malmo & Lund I Sweden

November 2019: Workshop "Do more with less" I Sharing & Circular Economy for business models I Athens, Greece